Amazon vs. Alibaba: Who Wins the Battle of the Platform Giants?

At first glance, Amazon’s sales seem to be unreachable – but Alibaba will certainly find it easier to gain a foothold in Amazon’s core markets. There is an exciting battle ahead, so let’s take a closer look at both of their odds.

In the USA and across Europe, Amazon is the undisputed leader in e-commerce. This is unlikely to change any time soon but, nevertheless, there is a global player who is constantly being compared to Amazon and is regarded as its toughest opponent. We are talking, of course, about Alibaba, the market leader in China and world’s largest national e-commerce market.

Up until this point, the two companies have not seriously got in each other’s way. And in each other’s markets, both players only play a subordinate role. But in the next few years Alibaba is aiming to expand into Europe – by investing around 15 billion dollars in logistics, among other things.

Time will tell how successful this project will be, but one thing is certain: Alibaba will find it easier to gain a foothold in Amazon’s core markets than Amazon in China. There is an exciting battle ahead, so let’s take a closer look at the odds of the two companies.

In 2018, Amazon generated sales of 232 billion US dollars, representing a growth of nearly 31%. Alibaba’s annual turnover of 39.9 billion US dollars seems far behind in comparison, but if there is one company that could compete with Amazon in the next few years, it is Alibaba. Looking at the group’s consistently high growth rates – 58% in 2018 – Amazon’s lead will continue to diminish if China’s e-commerce market leader continues like this – especially when you consider that the net profit of both companies is already comparable. 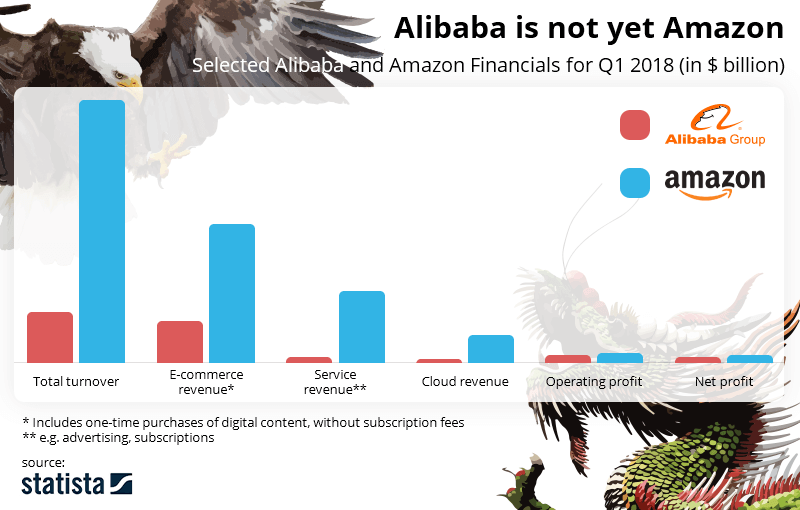 Alibaba cannot keep up with Amazon’s sales figures, but this could change in view of Alibaba’s European expansion and the rapidly growing Chinese eCommerce.

For years now, China has had the largest e-commerce market in the world. That’s no surprise because the number of internet users there is huge: according to the China Internet Network, there have been over 802 million users in China since 2018. That’s more than double the the population of the United States. Although Alibaba is already number one in China, the company still has great potential for growth there – much greater potential than Amazon still has in its core markets.

Why Amazon will have a hard time in China

Due to its gigantic size, China’s e-commerce market is one of the most attractive for foreign online companies. In contrast to Europe, where market shares are comparatively balanced despite Amazon’s dominance, Alibaba’s B2B and B2C platforms account for around 60% of China’s e-commerce market. Alibaba is also behind numerous well-established e-commerce services such as Alipay, the world’s largest online payment service.

Even Amazon has not (yet) managed to exceed a market share of 0.7% since its creation in 2004. And it probably won’t increase much more in the next few years, considering the following points:

What opportunities are available for Alibaba in Europe?

Since the end of 2018, it has been clear that Alibaba will build its first European logistics centre, the “Electronic World Trade Platform (eWTP),” in Liège, Belgium. This will be the fifth eWTP after Hong Kong, Moscow, Dubai and Kuala Lumpur.

Could Alibaba’s European expansion in the coming years seriously put Amazon in distress? Probably not, the market is already too consolidated and Amazon too firmly in the saddle. Nevertheless, it is clear that there is still growth potential – for example, Alibaba has quickly become successful with AliExpress in Europe in the last two years. The B2C app is already one of the most frequently used shopping apps after Amazon and eBay.

Only time can tell how the race between Amazon and Alibaba will end. The competition in terms of technological progress in the field of AI is likely to be particularly exciting. Alibaba’s innovative strength is unrivalled by Amazon, which gives them an advantage. For example, the Chinese group developed AI chatbots, neural networks to accelerate product launches, and AI systems to improve investment decisions. According to MIT Technology Review, Alibaba’s Voice Assistant is already significantly better than Google’s.

Who do you think will come out on top?

is the Sales and Operations Director at FACT-Finder for the UK and Ireland. He has worked with companies ranging from small entrepreneurial start-ups to Global brands such as BMW, Vodafone and Mindshareworld. He has 10 years of e-commerce experience across all verticals and, as a previous business owner, he knows how to create bespoke e-commerce solutions tailored to specific requirements and objectives.